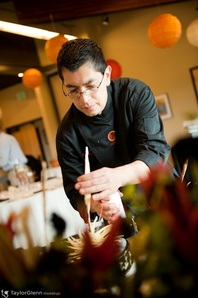 Chef Oscar Ortega was born in Mexico City where his culinary inspiration began.  After realizing his passion & skill for culinary creations, he decided to begin his studies in pastry arts at Cast Alimenti, Italy.  Ortega furthered his education by attending various courses in pastry, chocolate and sugar work.  His abilities and passion for pastries grew, expanding and working years throughout the UK, Italy, France and USA.

In 2004 Ortega opened his first pastry shop, Cioccolato in Jackson Hole, Wyoming USA. This is where he created his first exclusive line of Artisan Chocolates and Fine Confections.  Shortly thereafter, he took the opportunity and formed the first Mexican Pasty Team to compete in International pastry competitions.  In 2009 Cioccolato expanded and was renamed Atelier Ortega (AO).  Today AO is a thriving business that produces an extensive variety of Artisan Chocolates, Desserts, Entremets, Confections, Artisan Bread and Viennoiserie serving its global customer base.

In 2011 Chef Ortega was named one of the top 10 pastry chef in America, and became the head pastry coach for the USA pastry team that competed in Le Mondial des Arts du Sucre in Paris. In Argentina, he took silver in the Latin American selection for the Gelato World Cup in Italy.  This enabled him to compete in the world finals in Rimini, Italy 2014 and 2016 as a judge and team manager.

In 2012 Chef Ortega opened his 2nd shop in Jackson Hole, WY  CocoLove.  This is his retail boutique that carries his exclusive lines of Artisan Chocolates, Desserts, Entremets, Confections & variety Artisan breads.  Additionally, Chef Ortega works as a pastry consultant, and teaches advanced chocolate and pastry courses both national and internationally.
In 2014 Ortega leaded the USA Pastry Team at Le Mondial Des Art Sucres where they ended among the first top 5 in the world.  In 2015 He couched his national pastry team at the Latin-American selection for the gelato world cup.  He got best gelato and bronze medal. Later that year he competed at the world pastry champions in Milan Italy and won one of the most important awards; Best Pralines in the World 2015.
With his extensive competition experience, he founded the Mexican Pastry Team (MPT), a group of highly skilled, talented and passionate chefs that compete around the world in pursuit of culinary perfection.
​